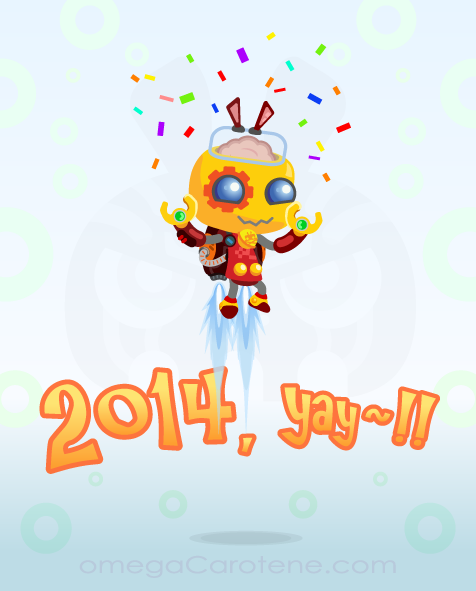 So far the new year has consisted of some NYE-partying with family & friends, vector Art-drawing, a bit of wine-tasting and one can of beer (so far), and a decent bit of Spelunky ‘ing with some shameless damsel & yeti-sacrificing plus reckless idol-grabbing.  ‘Tis kickin’ off to be not to shabby a year, i’d say.  ^__^

I must admit that the above image may be a bit potentially misleading, as END_OF_DOCUMENT_TOKEN_TO_BE_REPLACED 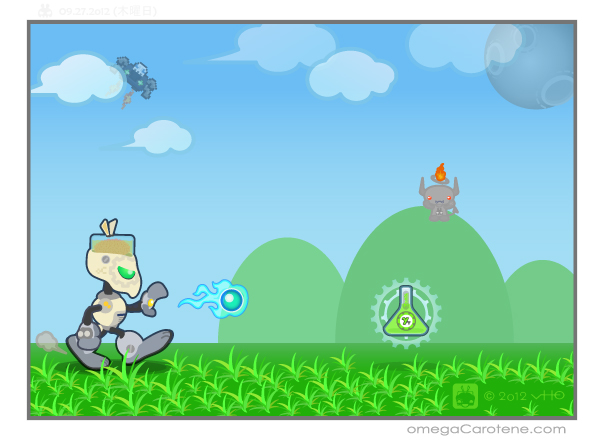 Heyo!  After a long hiatus, we’re now right on the brink of the end of 2o13…or the beginning of 2o14, depending on how one looks at it.

So, what better way to wrap up the end of the year than taking a look at the past…from the year before?  Okay, so that probably doesn’t quite make sense, but what the heck.   So…here’s my first vector concept-illustration (from april 2o12) for how i pictured my signature character , the cyborg-bunny dr. julius “oC” telcihc,  would look in a 2D platformer. 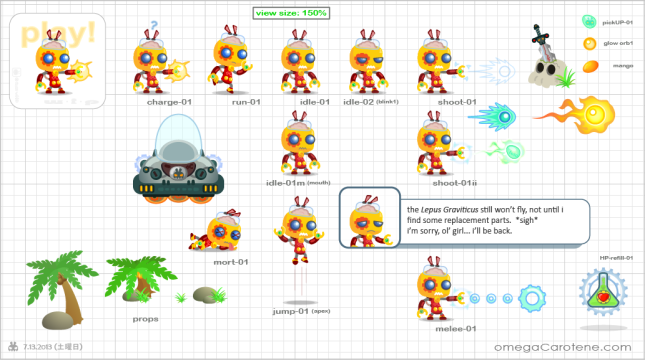 It’s been just over a month since i’d posted the previous entry my dev-Journal for my w-i-p flash game Telc Blast (working title), as i’ve been rather occupied talking about spam, wall-Chicken, and various other twistedness, but now we’re back at it again!
…Wait, come back!  this isn’t some creepy Smeagle/Gollum or Venom like situation where i constantly refer to myself as we ; rather, i like to think of it as we : you the reader(s), and i, the person who has written that which you are now reading.  Without readers, a blog might not cease to be  a blog, but it would certainly be a rather sad example of one.  But, silly quasi-existential drek aside, now let’s move onto my ramblings about some of the games that i enjoy and—for this project and some littleBigPlanet  levels— turn to for inspiration…

Being a MegaMan /ロックマン fan, i’d originally planned on making the game a 2D platforming shooter, and had even played some MegaMan2  (technically the Rockman Complete ロックマン2 Dr.ワイリーの謎 version that is available on PSN) for some reference; we tend to be inspired by what we like after all.  I’m currently still stuck on the Wily Machine (UFO?), as this game is rock-hard.  Later, i’d changed this to a melee-attack, hence the “melee-01” pose in the image above.  Thus, aside from my opinion that the Castlevania  series contains some pretty friggin’ fun games, i’ve recently been playing both some Castlevania II: Belmont’s Revenge  and Castlevania: Order of Ecclesia  (released 2oo8 on the Nintendo DS in NA regions)  for reference.  Should you care to read about some other opinionated rants regarding some specific game elements from the aforementioned series, such as Robot Ride Armors and wall-Chicken, then click the red links in this sentence.

Live + learn + play (my variation of what a fellow gamer/blogger-duo ConnorBros likes to say), and please feel free to comment!       >[:) 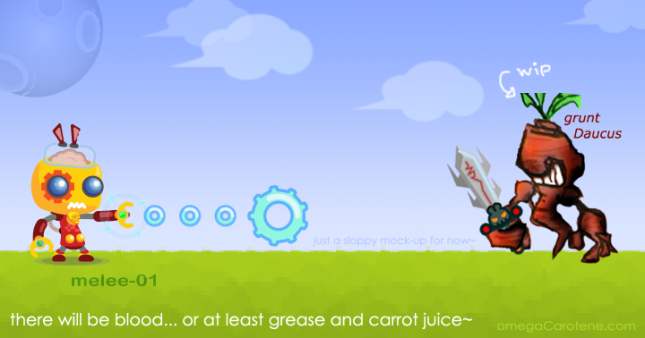 This isn’t quite that bunny-on-carrot violence that i’d alluded to in a previous entry, but rather the prelude to it: the calm before the storm, if you will.  Is this a finished piece of work?  Certainly not.  note the way the Daucus’ leafy-plume is cut off in a simple straight line.  I shall blab about this…perhaps tomorrow, when our yellow star shines its golden rays upon the North American continent~

So…here we start off my Development Journal for my w-i-p flash game Telc Blast .  Okay, so it’s kind of a lame name that doesn’t quite sum up my concept of the game (a 2D action-adventure platformer), but it’s a a working title.

The above dialogue box refers to the events of what starts off the story of  the “evil” cyborg-bunny dr. julius “oC” telcihc‘s (pronounced tell-sik ) adventure:  our protagonist’s trusty space ship, the Lepus Graviticus , has crash landed on a alien planet covered with vast, lush jungles and inhabited by the Daucus, a warrior race of carrot-like creatures.  telcihc must traverse the terrain to find several of the Graviticus ‘ parts (which had broken off during its fiery descent), in order to repair his damaged ship and return in time for dinner and maybe an episode of the show LOST …wait, does this overall plot sound familiar to you?  being stranded on an alien planet, a broken ship and missing part, carrot-like natives?

Did someone say Pikmin, Nintendo’s delightfully charming  take on the RTS (real time strategy) genre?  Right you are!  Well, it’s like they say, if you’re gonna crib something, at least crib from the best.  And i’ve been following Nintendo since i first started slaying Dracula’s hellish minions in Castlevania II: Belmont’s Revenge  at the age of 12.  Okay, so that was Konami-developed, but it was exclusive to the original gray-brick of a GameBoy, with Christopher Belmont and the beautifully detailed backgrounds displayed in all the glory that 4 shades of gray could muster on that cabbage-green, 160×144 pixel resolution LCD screen.  In retrospect, that thing was so heavy with 4 AA batteries that it probably would’ve broken the floor if one had dropped it.  Yet, regardless of Nintendo fandom and all, i still have yet to acquire me a WiiU…hmmm…  that needs to be rectified soon… like maybe when the next Zelda  comes out…  But what were we talking about again?

Telc Blast, right.  There’s that old saying, that there’s nothing new under the sun.  So i shall revel in my cribby-ness.  Yet, as i am building this as a 2D platformer in Flash, there is already that distinction.  And unlike the tiny Pikimin, who make up the protagonist Olimar’s army of cute-but-deadly head-bangers, the Daucus are the enemies in Telc Blast …or so they seem.  Suffice it to say that there will be bunny-on-carrot violence, albeit in a cartoony way.  Really, as if the gameplay in Pikmin isn’t violent: similar to an army of colorful ants, your floral legions of Pikmin swarm the local fauna and beat them into submission with their cute, leafy/flowery heads, all while slave-driver Olimar stands at a safe distance, whistling battle commands…but, then, that’s part of why i like the series so much (does that make me a bad person?).  One could argue that the relationship between the stranded astronaut and his flowery followers is a symbiotic one, but that’s a discussion for another day (or feel free to comment!  ^-^ ).  So, back to actually creating my Telcihc game, rather than all this blogging!

As you might have noticed from the title above, this is dev-Journal entry no.001, so thank you those who have actually read this far, and stay tuned!       >[:) 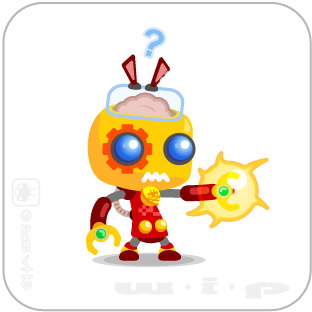 My Tweets
Join 891 other subscribers